Your opinions matter. Find out how to take part →︁

George Square has changed a lot over the centuries, from being common pasture lands to the city’s central civic space, we have provided a quick historical overview below. Further information and research will be made available later in the project. 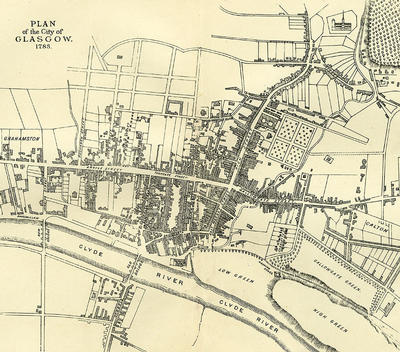 An established academic and ecclesiastical centre for Scotland from the 15th Century, Glasgow benefited  from its position as a port city through trade of tobacco, sugar and cotton. This is demonstrated by the number of significant public buildings constructed during this period.

In the 1770s the space that is now George Square was a marshy area unsuitable for agriculture or leisure use which was identified as the location for a new grand residential square with private gardens in the centre. This plan took a decade to implement and George Square, named after George III, was eventually opened in 1787. There was originally planned to be a statue of its namesake within the Square, however after America declared independence with the subsequent loss of the tobacco trading opportunities this plan was dropped. 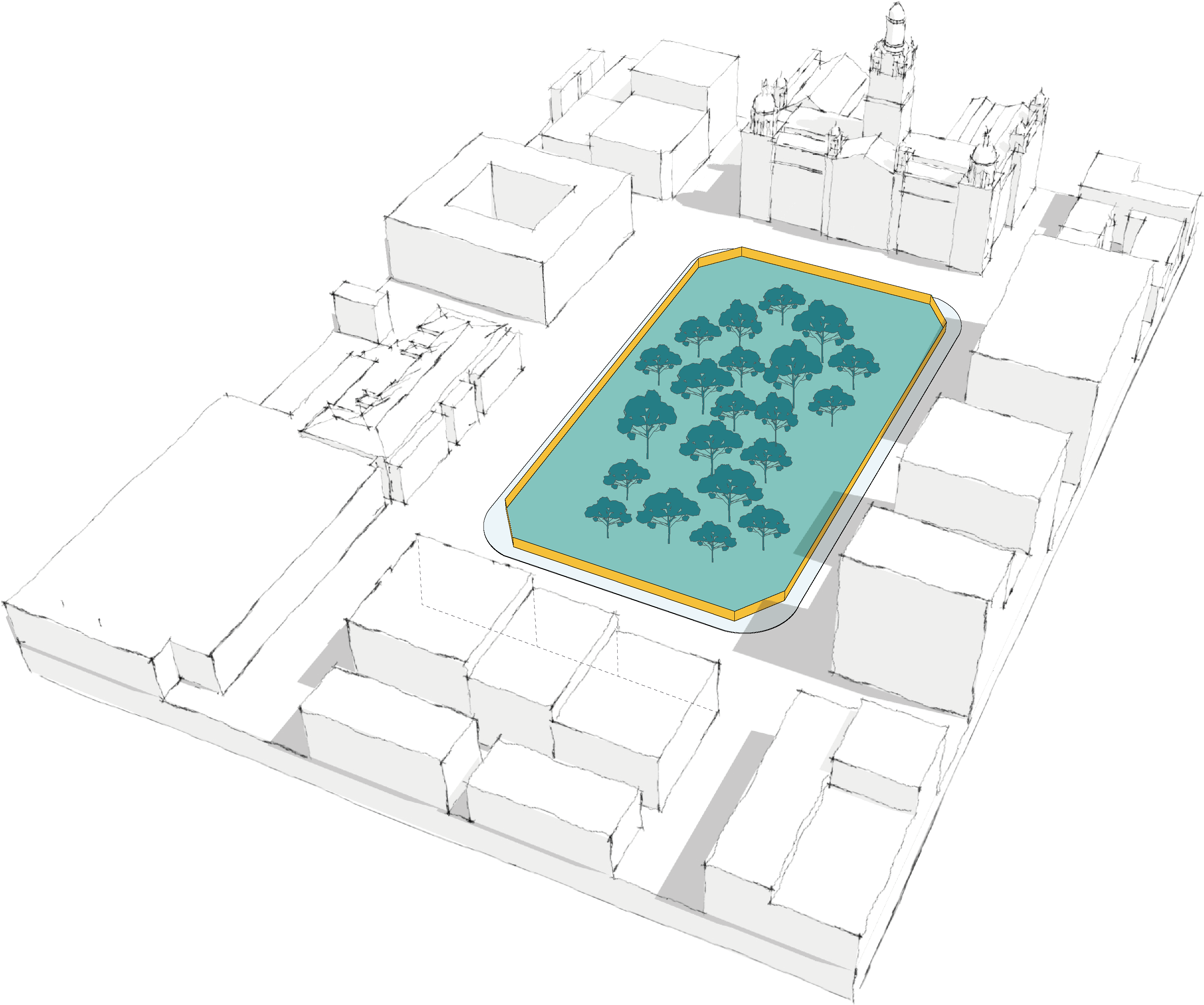 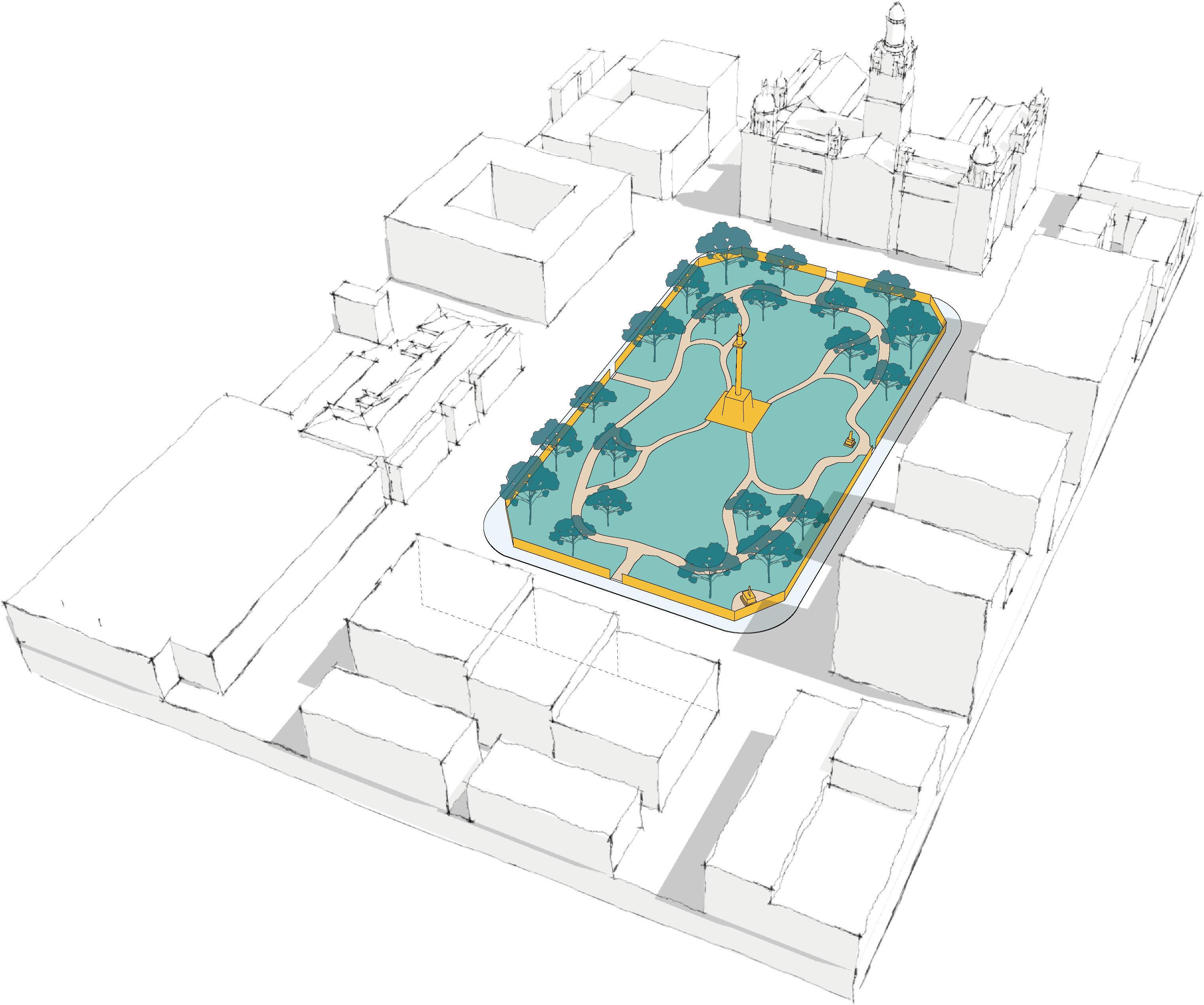 From its opening to today George Square has had a number of different designs from the use of the central gardens to graze sheep in 1815 to various landscaping plans to suit the trends from pastoral winding paths to regimented rows of trees and manicured lawns. 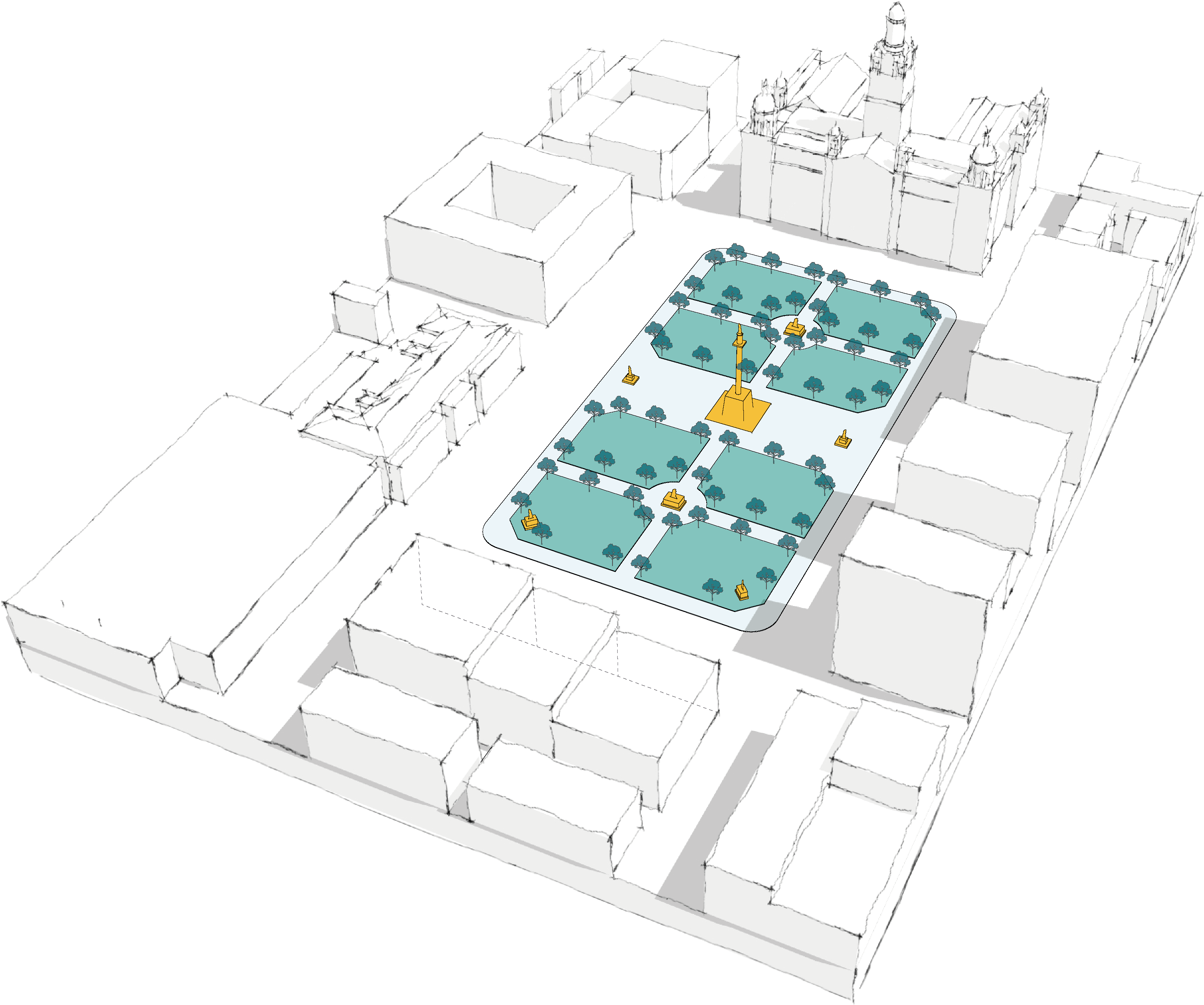 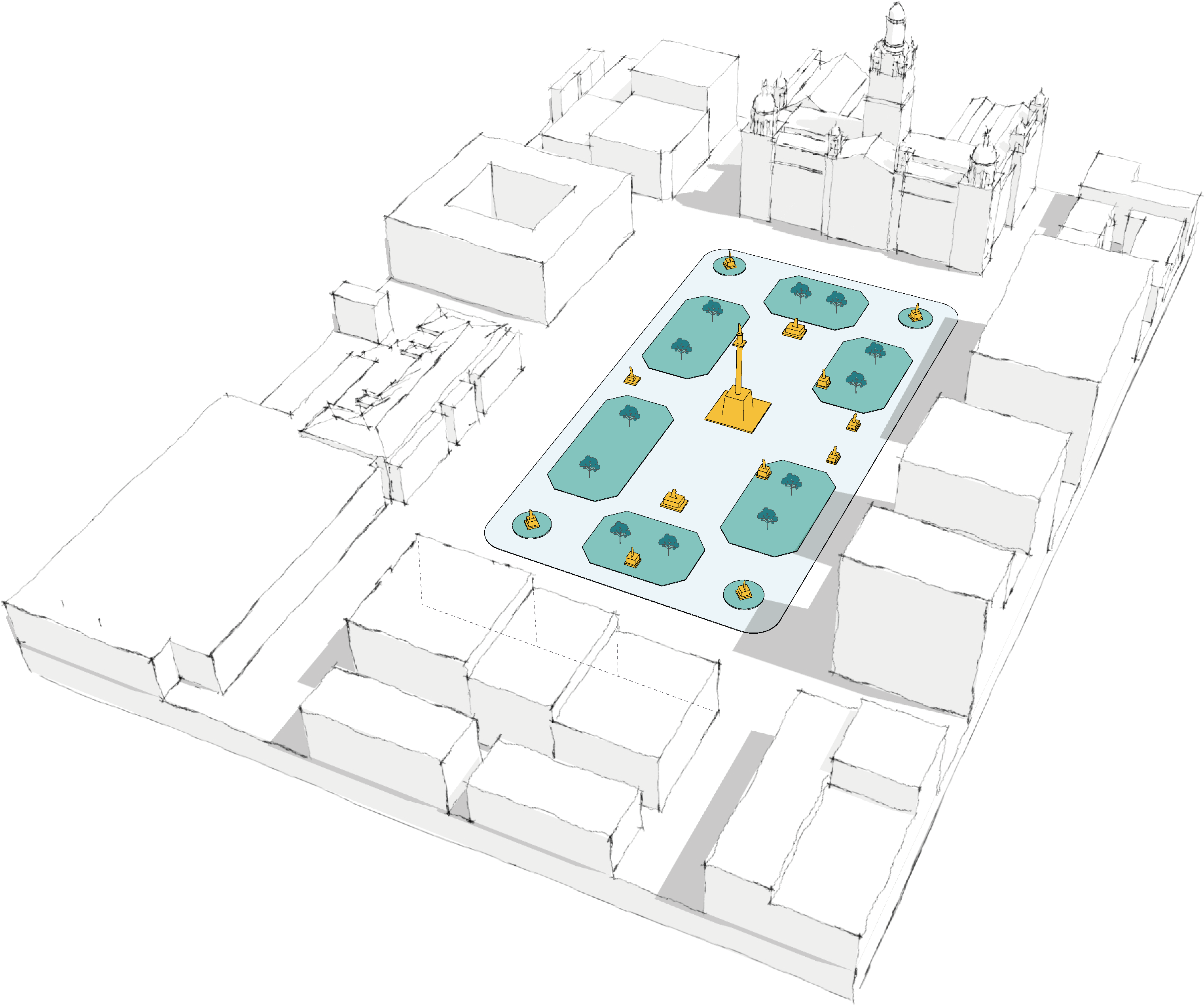 Originally the main entrance and axis for the Square ran north-south from Hanover Street, over the years this has altered to the entrances being on the Square’s corners leading to strong diagonal pedestrian desire lines that can be seen in how the people of Glasgow move through the space today. 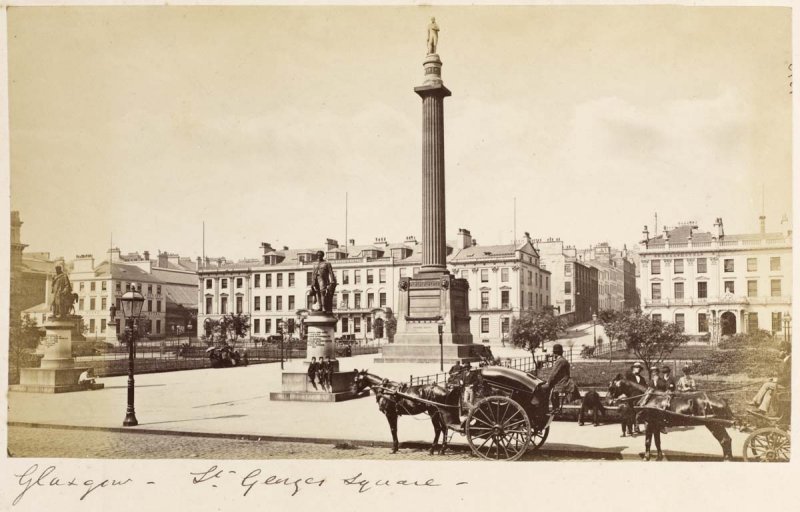 Over the years a number of statues and memorials have found their home in the Square. The Centotaph, built to commemorate Glaswegians killed in WWI which now acts as a memorial for all Glaswegians lost to war, was design by Sir John James Burnett in 1921 and opened in 1924 by Field Marshall Earl Haig. This is sited directly opposite the City Chambers and is a defining feature of the space.  In addition, George Square has twelve statues installed from 1837-1875. These include: the central 80-foot column topped with a statue of author Sir Walter Scott; the only known equestrian statue of Queen Victoria; and statues of Prince Albert, poet Robert Burns, Thomas Campbell, inventor James Watt, chemist Thomas Graham, General Sir John Moore, Field Marshall Lord Clyde, and politicians William Ewart Gladstone, Robert Peel and James Oswald.

Over the years these statues have had various homes both in the city and within Square. The current arrangement has been in place since the completion of the Cenotaph in 1924. 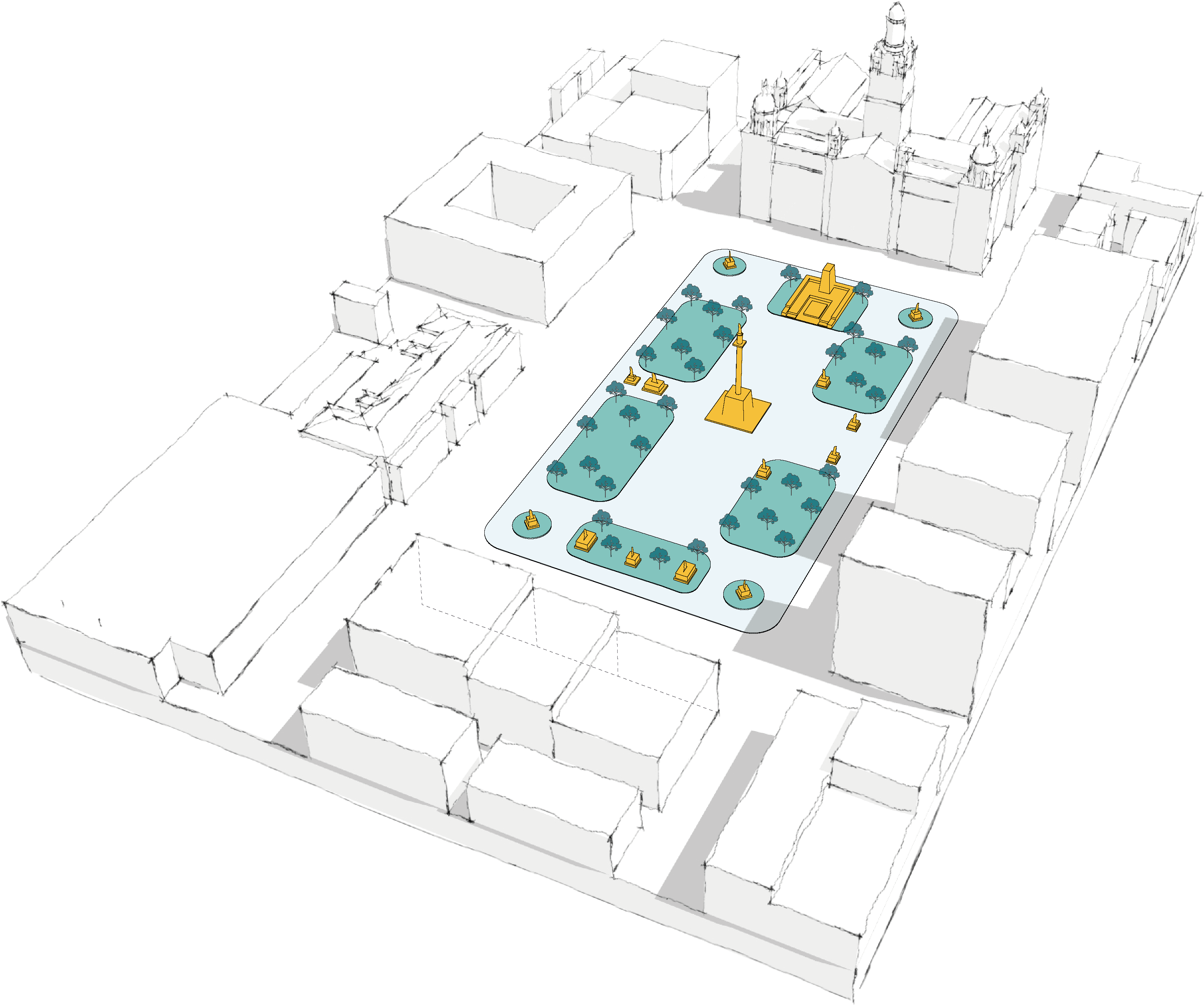 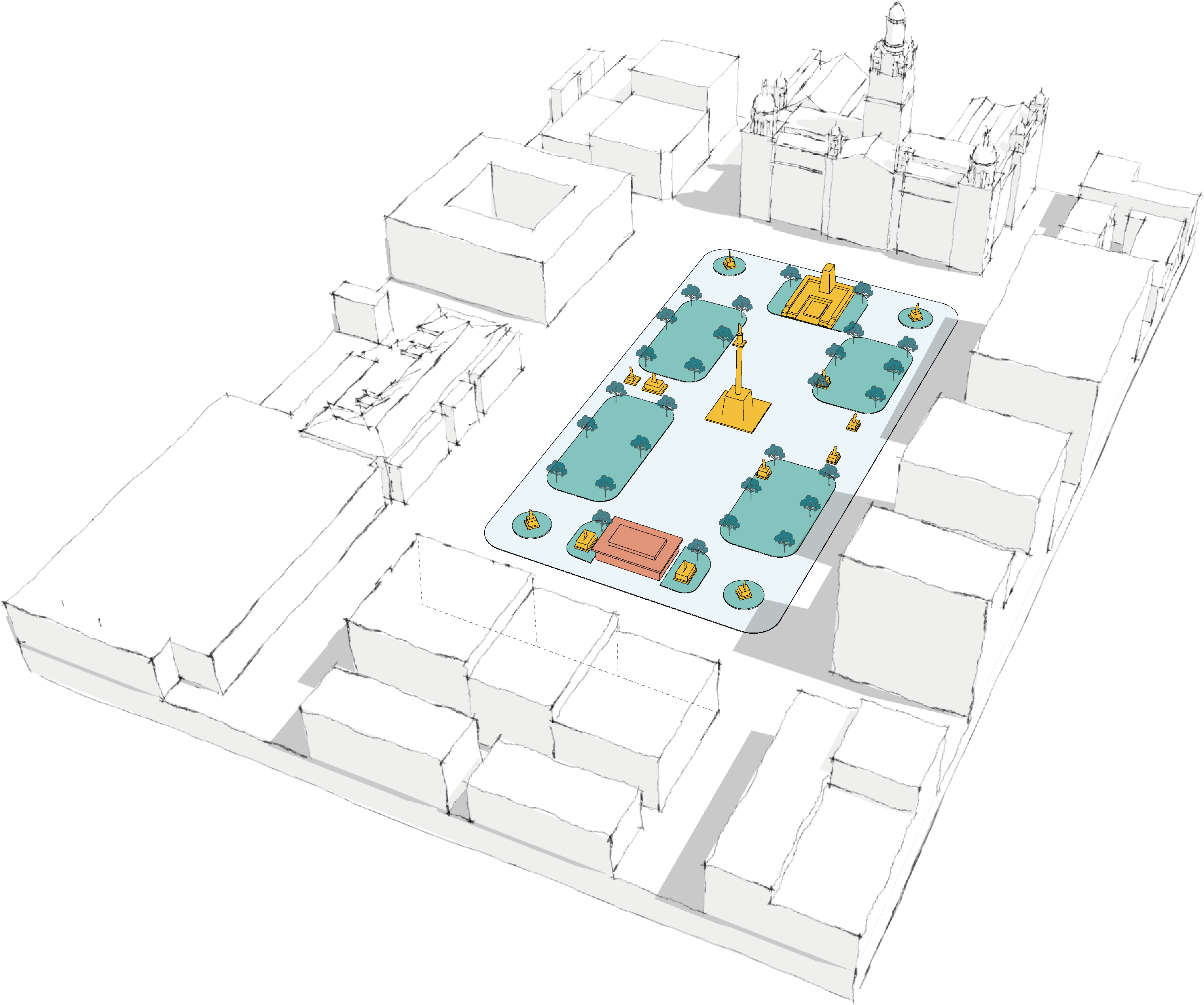 More recent changes include an X-Ray centre in 1957 aimed at promoting health awareness and to combat rising cases of tuberculosis; this was remarkably popular and successful. Following this an information kiosk was introduced in 1962. 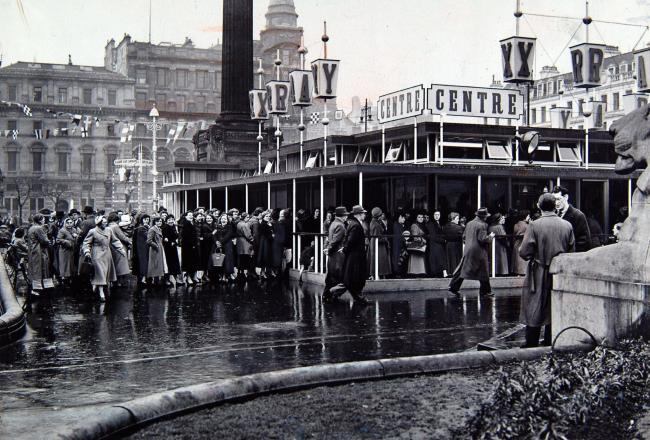 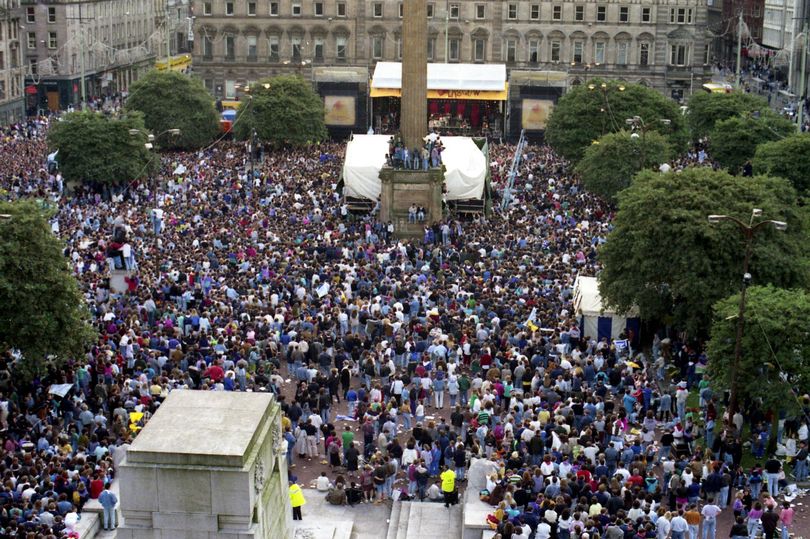 By 1990 the Square was positioned to host large scale public events including gigs during ‘The Big Day’ as part of a City of Culture, when 250,000 gathered in the city to watch Texas and Wet Wet Wet and many others at locations across the city. 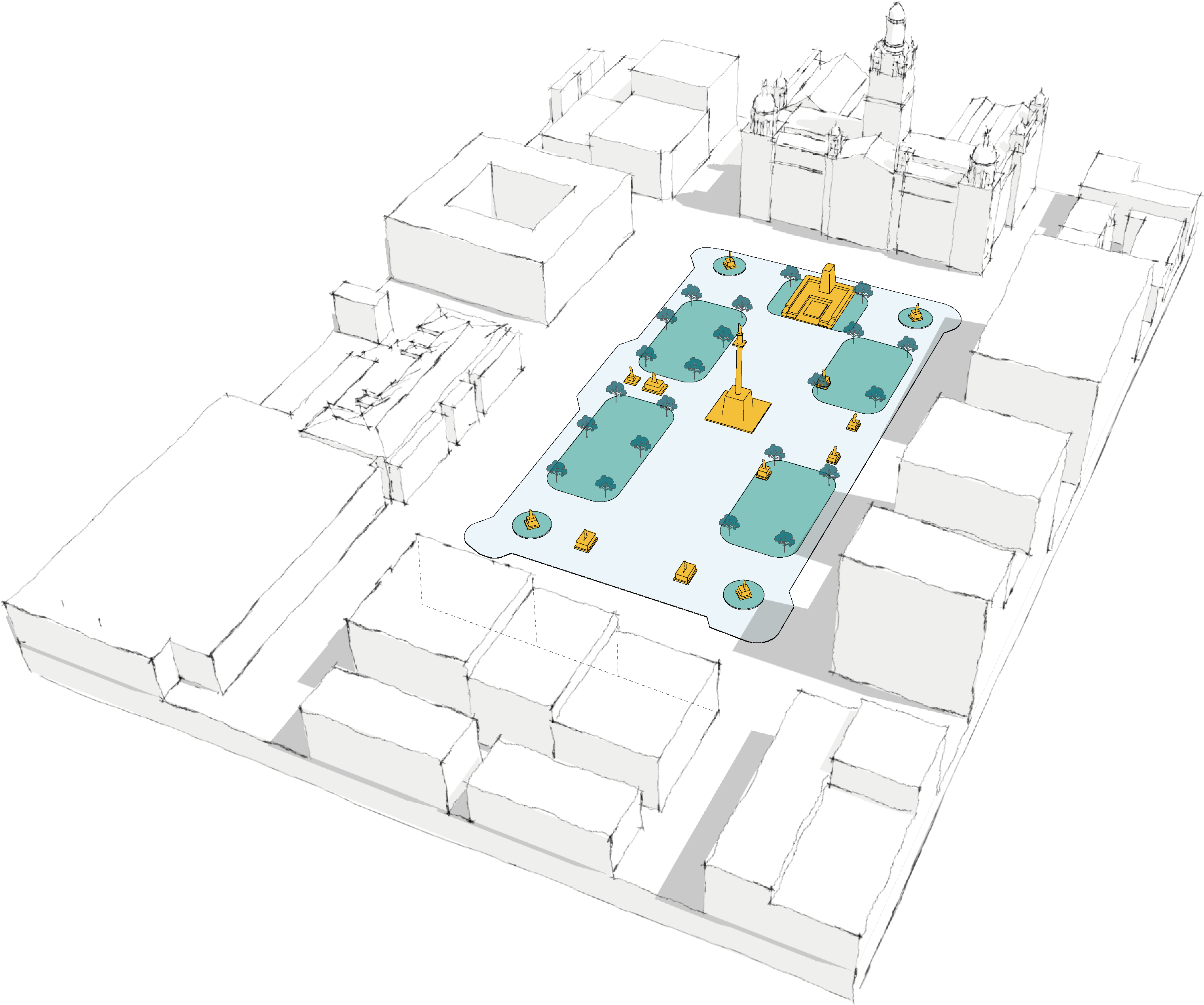 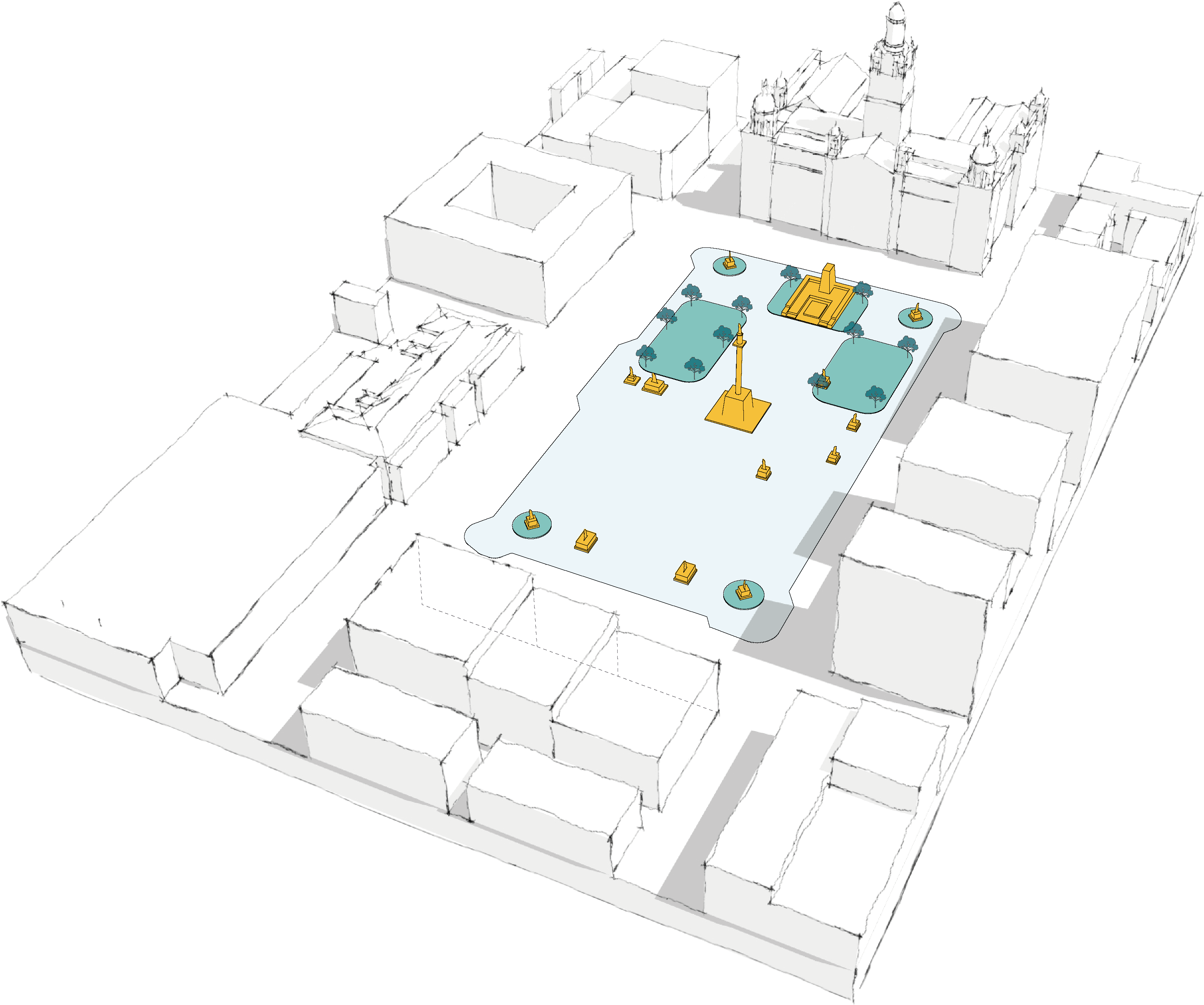 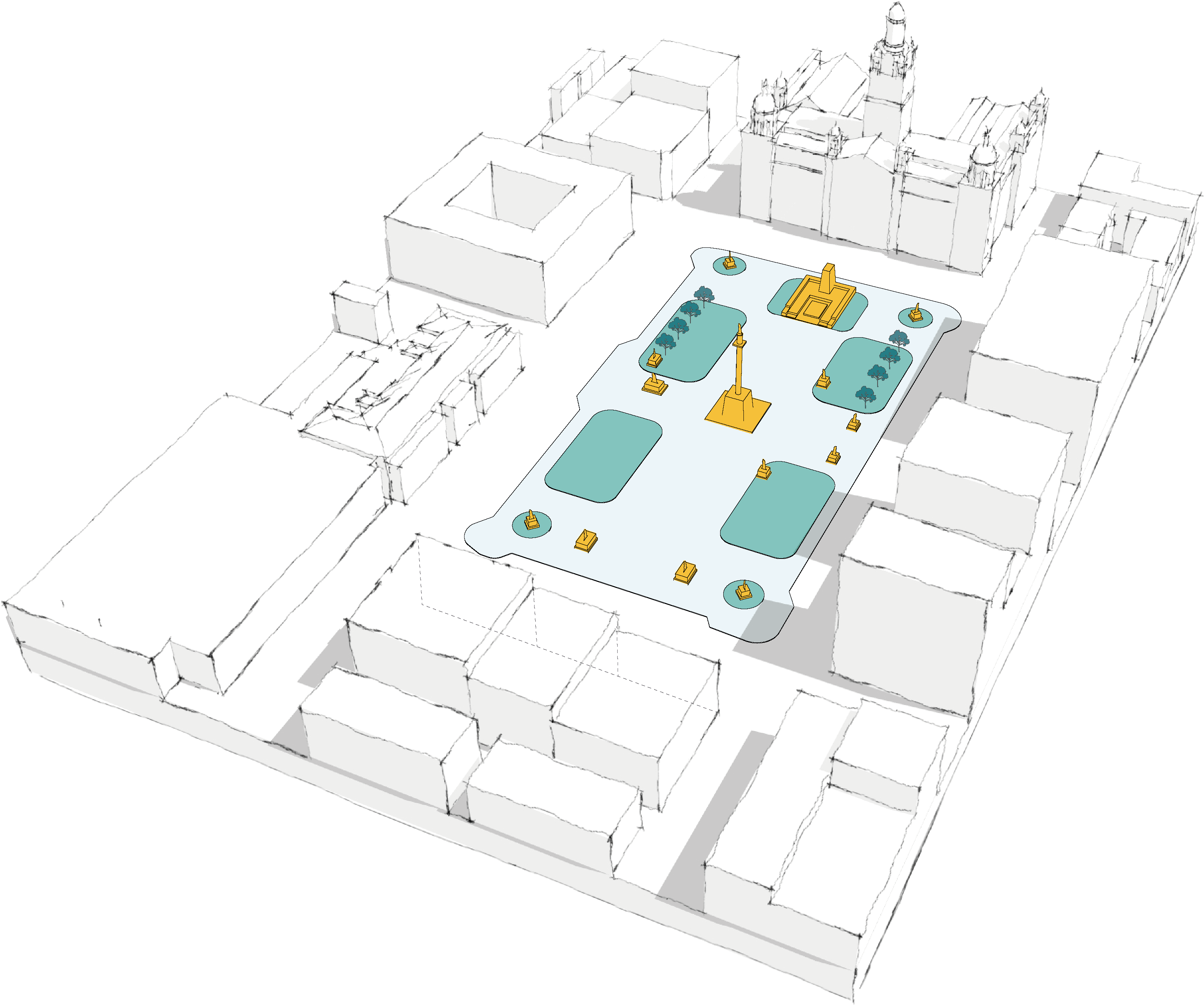 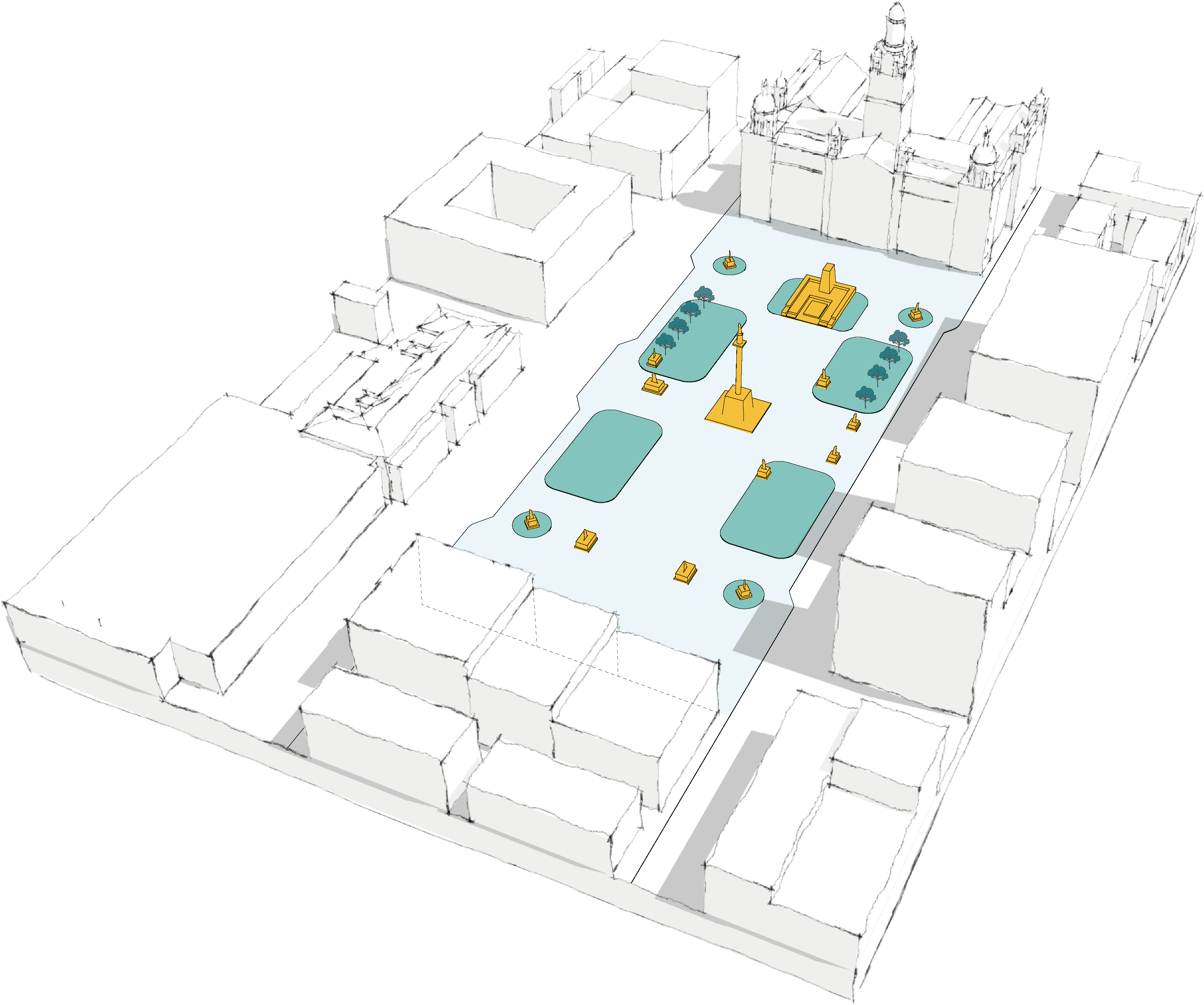 George Square continues to offer a location for musical events, light shows, ceremonies, sporting celebrations, political gatherings and protests, parades and gatherings. It is also often cast within Hollywood films and often acts as a stand-in for large American cities as well as Gotham city! Over the past decade the city centre has been featured in films including: World War Z; The Flash and Batman; Indiana Jones (yet to be named); Under the Skin; Cloud Atlas; and The Fast and The Furious. 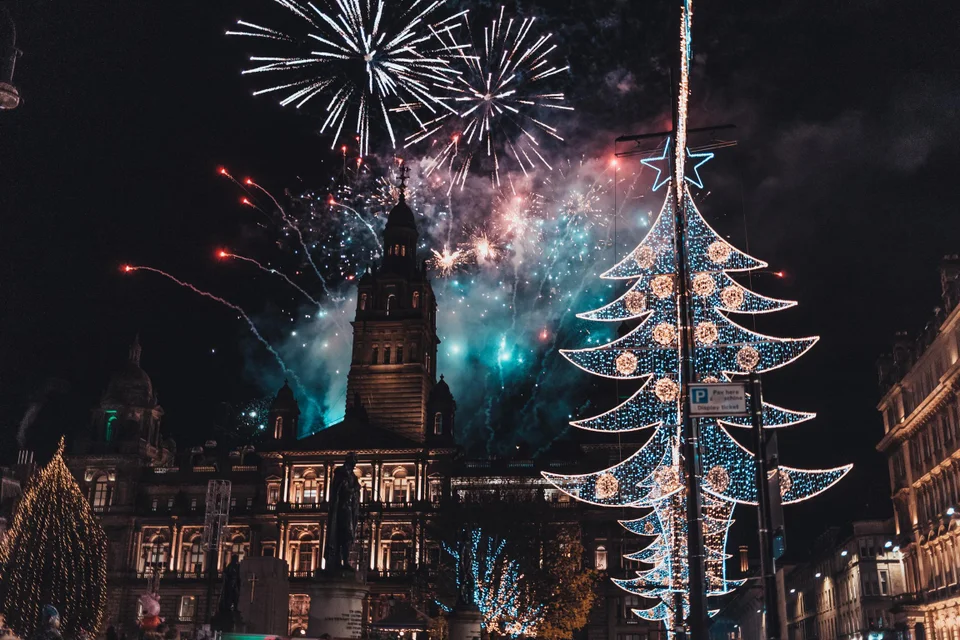 Comparison to great urban spaces across the world

George Square is a great space for the public which is comparable in scale and potential to some of the world’s most celebrated public squares and space. 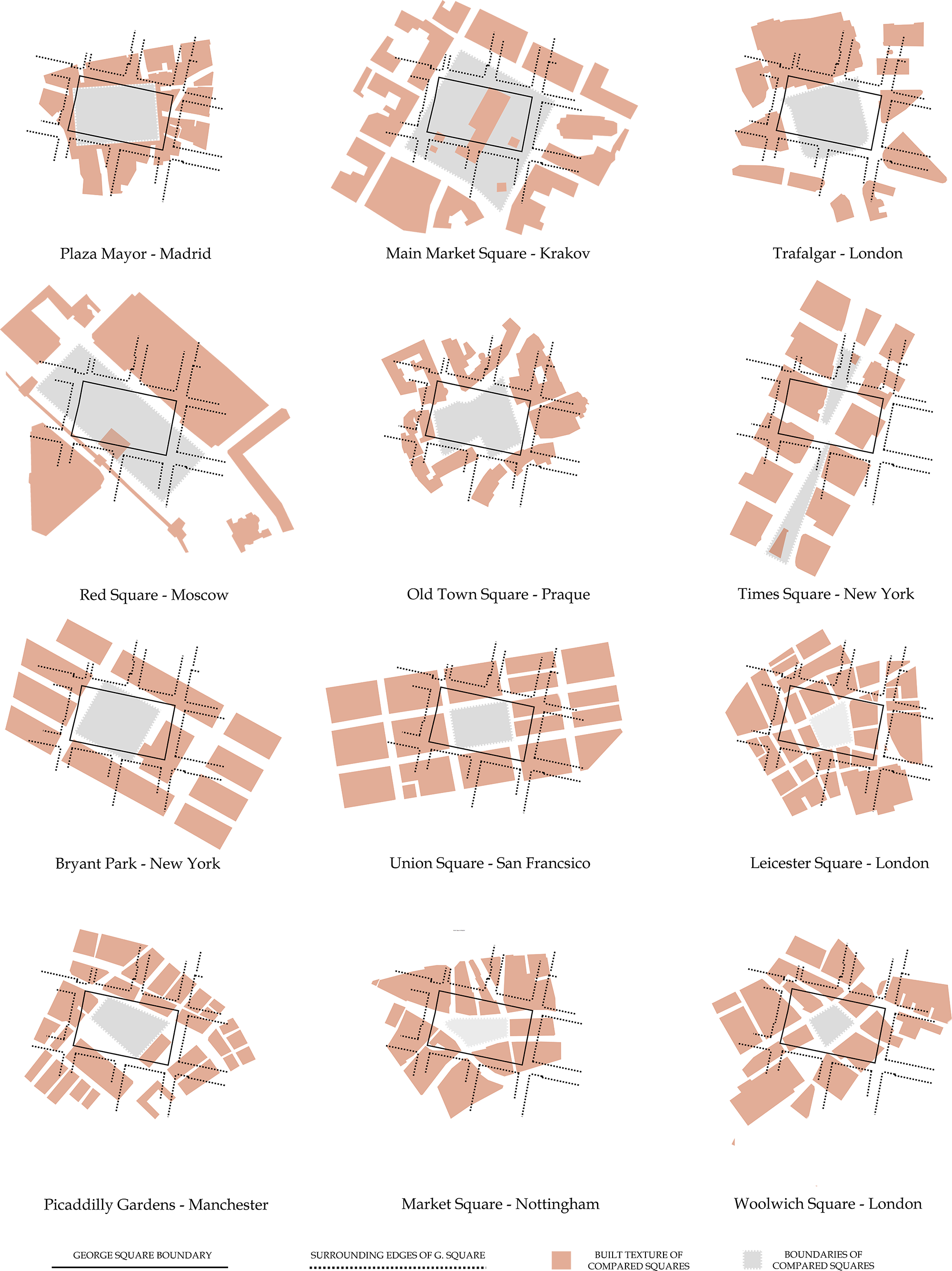 "Commercial architecture in St. Vincent Street is on a monumental scale. East of West Campbell Street. Victorian palazzi are ranked alongside later and even grander Free Style and Neo-classical buildings in a concentration of the highest quality. Further beyond the remaining terraces of Blythswood, 'Greek’ Thomson’s St Vincent Street Church, hemmed in by late 20th Century office blocks still governs the hill.

The Eastern end was opened off George Square in I804, the Western end (beyond St Vincent Place) in 1809 as a smart residential Street; commercial buildings had begun to take the place of the terraced houses by the middle of the 19th Century." 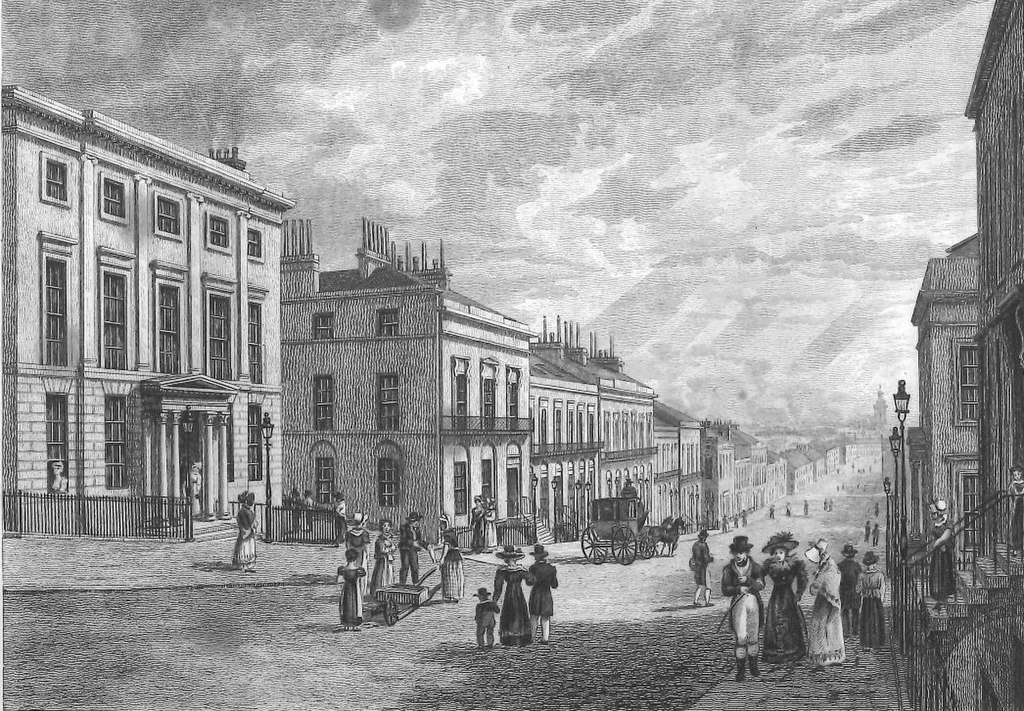 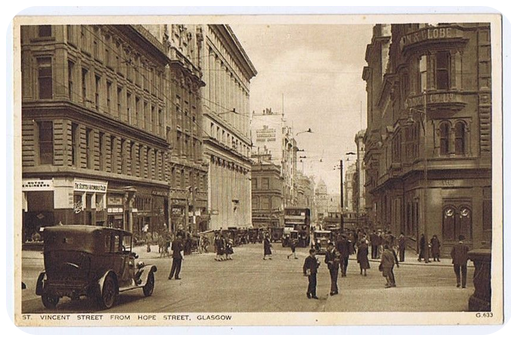 A collection of some of the finest architecture in the centre of the city, notable for its concentration of listed buildings, as the street climbs impressively up Blythswood Hill to form one of the most striking vistas in Glasgow. The grid street pattern dominates, providing the canvas for a series of ever-more-impressive Victorian and Edwardian commercial facades that only become apparent as you progress westwards.  Nowhere else in Glasgow do we so eloquently see the mercantile wealth of Glasgow so ably demonstrated, from the spacious St Vincent Place onwards.

"George Street (opened in 1792 as part of the planned development of the Ramshorn lands) leads from the NE Corner of George Square.

The western end contains some buildings of considerable architectural and historical interest, most notably the former Inland Revenue Offices of 1885 and the former Royal College, now part of the University of Strathclyde. The side elevation of the City Chambers is wrought large but there are only limited views to what is undoubtedly one of the three most important buildings surviving in the city centre. There are interesting buildings along the whole length. At the Eastern end, many of Glasgow's clubs and institutions set amongst a wide variety of commercial architecture."